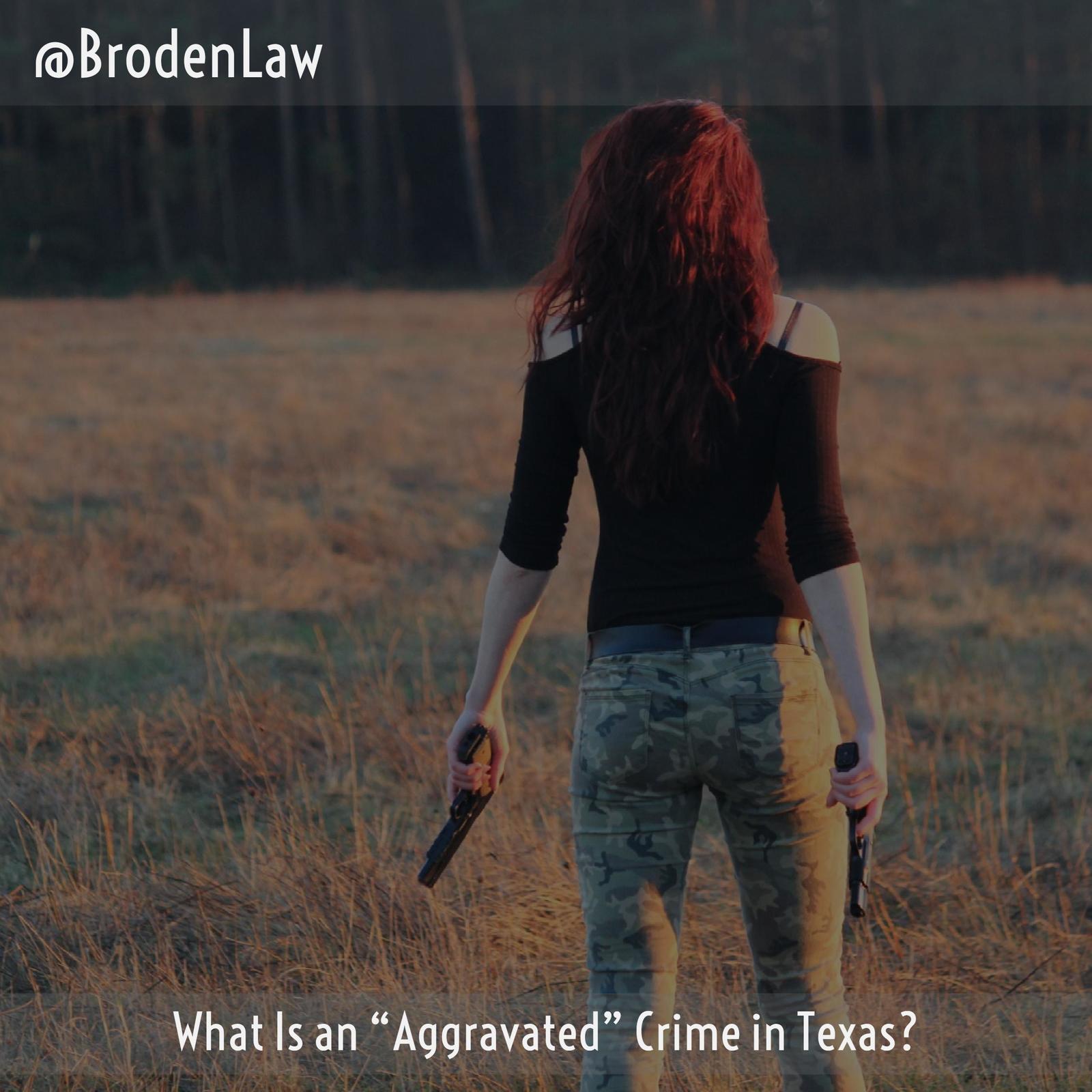 What Is An “Aggravated” Crime In Texas?

What constitutes an aggravated crime varies from state to state

Many people hear that a crime is “aggravated” and wonder what that means. What distinguishes a robbery from an “aggravated” robbery, for example? Is one worse than the other?

The short answer is that, yes, an aggravated crime is a more serious charge that carries more severe penalties upon conviction. Generally speaking, to be charged with an aggravated crime, a defendant must have done something that made the offense more dangerous. For example, breaking into someone’s house is likely to result in a burglary charge. But breaking into a house with a loaded gun in your jacket will probably result in an aggravated burglary charge, even if you didn’t use the gun or threaten anyone with it during the break-in. In many cases, simply having a dangerous and deadly weapon with you at the time of a crime is enough for police or prosecutors to bump up the charge.

Although what constitutes an aggravated crime varies from state to state, the law generally imposes enhanced penalties on crimes that involve specific factors. These factors make the crimes more serious and more dangerous, which is why they’re considered aggravated versions of the basic offense—sometimes called a “simple” version of the same crime.

Using or Possessing a Weapon – In most cases, just carrying a weapon with you while you commit a crime is enough to generate an aggravated charge.

Causing Bodily Injury – The law takes it seriously when people get hurt during a crime. For example, getting into a shoving match at a bar might result in a simple assault charge. This could easily get bumped up to aggravated assault, however, if one person punches the other, causing bodily injury.

Crimes Against Certain Individuals – Crimes can also be aggravated if they are carried out against individuals in certain careers, or those deemed especially vulnerable by society. For example, crimes against children and the elderly may be charged as aggravated. The same is true for offenses that victimize the disabled or mentally challenged. Many statutes also include aggravated charges for crimes carried out against police officers and rescue personnel, such as EMS workers and firefighters.

Just because a criminal charge is classified as aggravated, however, does not mean it can’t be lowered to a regular offense at some point during the case. In some situations, prosecutors will agree to drop the charge to a lower charge in exchange for the defendant pleading guilty to a lesser charge. In other cases, the prosecution doesn’t have adequate evidence to establish a case for an aggravated crime.

Have you been charged with an aggravated crime in Texas? A lawyer can help you protect your important legal rights. Get in touch with an experienced Texas criminal defense lawyer to discuss the options in your case.