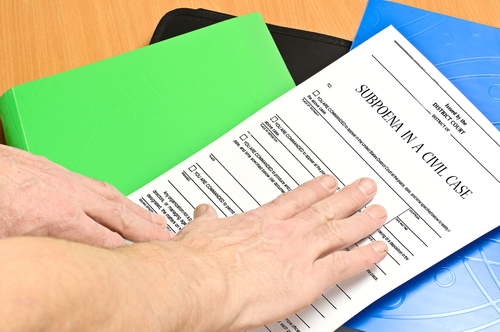 What Happens If I Ignore a Subpoena?

Whether you’ve received a subpoena to appear as a witness or a subpoena duces tecum, it’s never a good idea to simply ignore the subpoena.

If you have received a subpoena, it’s normal to have a lot of questions. You might even feel nervous or upset. After all, it can be frightening to receive an official document from the justice system that has your name on it. Are you in trouble? Will you go to jail over this?

First, it’s important to understand what a subpoena is and what your obligations are regarding it.

What Is a Subpoena?

The basic definition of a subpoena is that it’s a court order asking a person to appear in court and answer questions or produce documents, also referred to as a “subpoena duces tecum.” In some cases, a subpoena can require someone to do both of these things. The important thing to remember is that a subpoena is a court order. If you ignore it, you could face serious consequences. In most cases, it’s in your best interest to speak to a Texas criminal defense lawyer if you receive a subpoena. You want to make sure that you do everything you’re obligated to do under the law.

Courts can issue subpoenas in both civil and criminal cases. However, ignoring or refusing to comply with either type of subpoena can result in criminal consequences. This possibility is why it’s never a good idea to blatantly refuse to comply with a subpoena. If you object to what the subpoena is commanding you to do, you do have options. However, you should discuss these options with your criminal defense lawyer, who can ensure that you remain in full compliance with the law.

You may have seen grand jury subpoenas in the news lately and wondered how they work. Grand juries can be convened in both state and federal courts. A grand jury’s responsibility is to examine evidence and hear testimony about potential crimes. In the federal criminal justice system, a grand jury can contain anywhere between 16 and 23 jurors.

Grand juries are often described as being highly secretive, which can sometimes lead to confusion about what they do and the purpose they serve. Although a witness in a grand jury proceeding is allowed to have legal counsel, the lawyer is not permitted to be in the courtroom or hearing room when the witness testifies. However, the witness is permitted to confer with his or her lawyer outside the courtroom.

If a grand jury establishes there is probable cause for a criminal charge, it can issue an indictment. One of the ways grand juries can gather evidence is by issuing subpoenas. As with non-grand jury proceedings, a grand jury has the authority to issue both subpoenas and subpoenas duces tecum.

Possible Consequences of Ignoring a Subpoena

Whether you’ve received a subpoena to appear as a witness or a subpoena duces tecum, it’s never a good idea to simply ignore the subpoena. If you ignore a subpoena, a judge could hold you in criminal contempt and punish you accordingly.

Likewise, under federal law, judges have the power to hold a person who refuses to comply with a subpoena in criminal contempt. The judge can impose fines or order the person jailed for up to six months. If the person is convicted for criminal contempt, the person could serve even more time in jail.

As you can see, the consequences for refusing to comply with a subpoena can be harsh. Individuals have spent months in jail for failing to do what a subpoena commanded.

So, what should you do if you feel like you either can’t or shouldn’t comply with a subpoena in state or federal court? Rather than ignoring it, the best course of action is to work with a Texas criminal defense lawyer. Your attorney can file a motion to quash the subpoena with the court, which essentially asks the court to throw out the subpoena.

Once your lawyer files the motion to quash, the judge must then hold a hearing during which you’re allowed to present evidence and testimony supporting your position. There are many reasons why a judge might agree to grant a motion to quash. For example, maybe the subpoena imposes an unreasonable burden on you. Or perhaps the subpoena asks for an unreasonable number and breadth of documents, and it would cost considerable time and money to produce them. Your lawyer can help you determine the best course of action in your case.