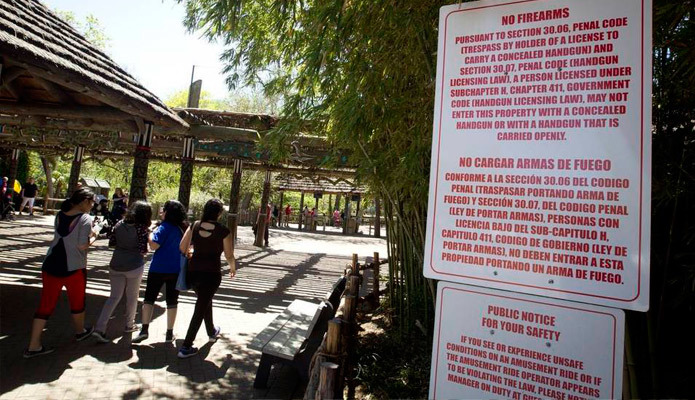 Texas Open Carry Gun Law a Point of Contention, Confusion for Many

Months after Texas law changed to allow the open carry of handguns, many continue to debate the legality of signs prohibiting guns on certain properties.

The Texas open carry gun law continues to spark widespread debate even months after a measure allowing the open carry of handguns went into effect January 1. The latest discussions are centered around the legality of signage posted on government properties that prohibit weapons of any type. Reports say several complaints have been filed by Texans who feel they were wrongly prevented from carrying their guns, sparking an investigation by the state Attorney General’s office.

“A long-promised gun law crackdown is underway in Texas. But gun owners aren’t the target. Government entities that wrongly prevent handguns from coming onto their property — in Tarrant County and beyond — are.”

“Local governments have been prohibiting for years where they are not supposed to,” said Terry Holcomb, executive director of Texas Carry, who has been working with the attorney general’s office on the issue. “These [complaints] aren’t going to be forgotten about.”

Not having a clear understanding of how to interpret the recent law that increases gun rights for Texans may prove problematic for the more than 966,000 active handgun license holders Texas Department of Public Safety records show exist across the state. Many are stressing the importance of knowing whether signs banning handguns are wrongly posted because of the potential criminal consequences of failing to obey them if they are legal. Holcomb has said of the dilemma “Nobody wants to get arrested. We believe we can carry in certain places lawfully,” but charges could be filed against those who are wrong.

Texas criminal defense attorney Mick Mickelsen says of the issue “even licensed Texans could be faced with a third-degree felony if they carry their handguns in restricted areas.”

The Dallas criminal lawyer further suggests that when laws seem ambiguous to the public, it makes it difficult for even the most dutiful citizens to follow them. Mickelsen says “I’ve seen a number of cases in my career involving defendants who genuinely didn’t understand the scope of their crimes because of how they interpreted the law. Higher instances of this are seen in white-collar crime cases, particularly those involving public figures accused of ethics violations.”

With regard to the gun law issue, Mickelsen states, “unless one is a legal expert, it can be difficult to understand the boundaries when the state law contradicts restrictions outlined on signs posted by government agencies.”

The Attorney General’s office is reportedly investigating more than 60 complaints filed over signs preventing open or concealed carry on a number of government properties to determine whether they are in violation of state law.

Individuals who need help with a criminal case involving a gun charge or other federal or Texas state criminal legal matter can contact the criminal law firm of Broden & Mickelsen Dallas directly for an assessment of their legal options.