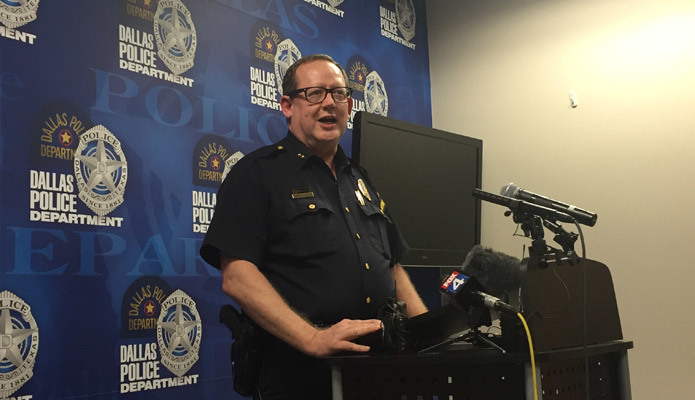 Dallas police are investigating a recent Oak Lawn area attack as a purported hate crime. Local media reports say there has been a string of reported attacks and robberies in the area since last summer, and possibly more that have gone unreported. The latest incident involved a man who was allegedly shoved to the ground by two people while walking his dog.

“Two men attacked a man walking his dog early Saturday in Oak Lawn in what police are calling a hate crime, the third in the area since September…The latest occurred around 4:30 a.m. Saturday in the 3000 block of Douglas Avenue when two men approached a man and asked what his dog’s name was. When the man answered, one of the men made a derogatory comment about the man’s sexual orientation and shoved him, police said.”

The Texas Legislature adopted its current hate crime statute in 2001.

“AUSTIN, Tex., May 11— After refusing for months to say where he stood, Gov. Rick Perry of Texas signed a hate crimes bill today that strengthens the penalties for offenses against minorities, gays and others. The measure, the James Byrd Jr. Hate Crimes Act, was named for the East Texas black man who was dragged to his death from a pickup truck in 1998 by three white men.”

Since that time, according to statistics from the Office of Court Administration, convictions have been earned on related cases at a rate of less than one per year. In the last decade, only one has been taken to a jury. According to Dallas based criminal defense attorney Mick Mickelsen, who has no connection with the aforementioned case, the standard for prosecuting hate crimes is extremely subjective. Says Mickelsen “there are only a very limited number of instances where proof exists that a crime was linked to a defendant’s bias against a certain social group.”

The Texas attorney further states that even though the state law was designed to enhance penalties for such crimes, most serious crimes are excluded due to the high penalty range that already exists for them.

“Many complexities exist for these types of cases, which makes them difficult to try from a prosecutorial standpoint. From a defense standpoint; however, this leaves room open for presenting a strong argument for why such an allegation doesn’t fit the bill.” The attorney suggests that individuals who have been accused of a hate crime consult with a criminal defense attorney as soon as possible to obtain information about their legal rights.

No one has been arrested in connection with the aforementioned alleged crimes. Police are still investigating the recent attack.

Individuals who need help with a criminal case involving a hate crime allegation or other federal or Texas state criminal legal matter can contact the criminal law firm of Broden & Mickelsen Dallas directly for an assessment of their legal options.