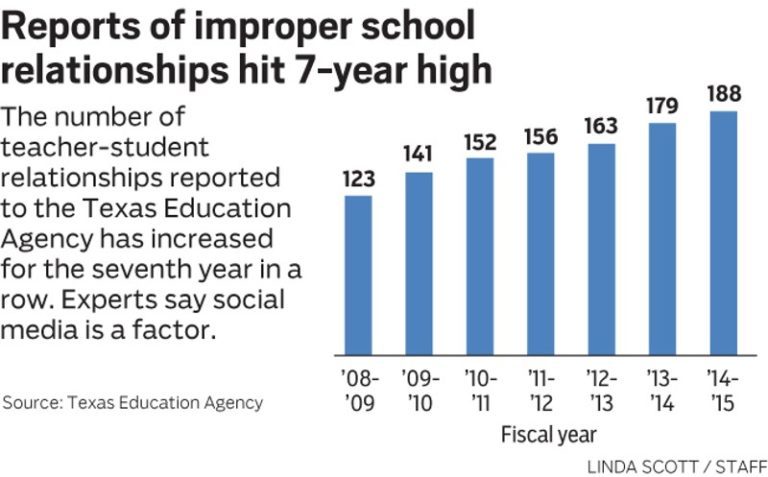 It’s no coincidence that many of the most lurid national headlines about inappropriate relationships between teachers and students are from Texas.

In 2016, Texas saw a boom in prosecutions for these types of relationships, the Houston Chronicle reported.

The trend has led to the drawing up of stricter rules and a call for new legislation in 2017 by Lieutenant Governor Dan Patrick.

According to the Texas Education Agency, the number of investigations involving inappropriate relationships between teachers and students rose from 141 in 2009-10 to 179 in 2013-14 and had reached 188 in 2014-15. The overall increase in prosecutions for these relationships from 2013 to 2016 has been almost 60 percent.

The most high profile case in 2016 involved Alexandria Vera, a 24-year-old former Aldine ISD teacher. Vera was impregnated by a 13-year-old student who she was having a relationship with.

The Texas Education Agency wants more money to hire new investigators who would look into inappropriate relationships between educators and students.

It has called for Texas lawmakers to pass legislation requiring school districts to immediately revoke the teaching licenses of sex offenders. In the past, it has been easier for districts to fire the teachers but not pursue the removal of their licenses.

Superintendents would face criminal penalties for failing to report improper relationships. The TEA has also requested the authority to compel witnesses to testify.

This is a fast-moving area and a likely priority for legislation in the new session. Although there has been high profile and blatant cases, educators are also vulnerable to false accusations from students in the current climate. If you have been charged with a crime of this nature, you are likely to be facing a long term behind bars and should contact an experienced Dallas criminal defense lawyer.